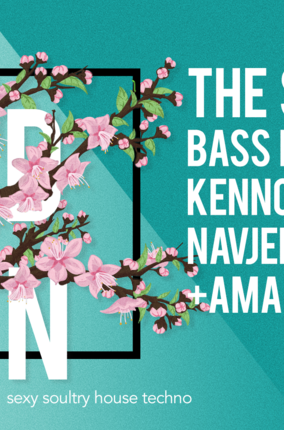 🎋 Sexy | Soultry | House | Techno 🎋🈶 🈚️ 🈸 🈺 🈷️ ✴️Hello Soul Work friends!! Are you ready for day parties? Are you ready Eden? Spring is just around the corner and our community garden is ready to bloom into its 4th season. Are you ready to bloom with us?? We've missed your beautiful souls and we're ready to dance and share memories with you in our new Japanese garden. As you know, with each new spring, comes an opportunity for rebirth, growth and connection and that's exactly the itinerary for the garden this season. Please join us as we start our day party series with special amphibian guest and burningman artists.... The Scumfrog (NY).Dress theme: Kimonos (encouraged) 👘Garden theme: Japanese Vibe: Love, peace, community ❤️✌🏽Tickets: Venmo 🎟(sorry, no guest lists no discounts.)Soul Work social and music pages:SC page: https://soundcloud.com/soulworkuswebpage: www.soulworkus.comIG: @soulworksd "it's not about you, it's about all of us" . --Soul WorkArtists:The Scumfroghttps://soundcloud.com/thescumfroghttps://www.residentadvisor.net/dj/thescumfrog/biographyNavjeet Sarna (Soul Work/Alkaline)https://soundcloud.com/navjeetsarnaKennos (Soul Work)https://soundcloud.com/kennosmusicBass Exotic (Soul Work)https://soundcloud.com/bassexotic__________________________________________________________________A little ditty on our headliner:The Scumfrog, an Amsterdam native and New York City transplant, has evolved his sound by combining the best from both sides of the Atlantic with a sophisticated blend of New York dark and rock-influenced beats and sexy European sounds. His recent successes include four no. 1 club hits; 2001's Ibiza anthem "We Love You" (Rolling Stones 60's cover), his remix of George Michael's single "Freeek", the billboard dance smash "Love At First Sight" by Kylie Minogue, and his re-conception of Dirty Vegas' "Days Go By". 2002 was an exciting year for The Scumfrog. Highlights included collaboration with David Bowie on Positiva, and DJ Gigs all over the world.At the end of 2002, his new single "Music Revolution" was available for free download off his website for ten weeks. This generated enough play and publicity for the song to make a big impact during the 2003 Miami Winter Conference. The song is also featured on his compilation "Extended Engagement", which features 20 of his recent productions and remixes. The Scumfrog DJ sets are not limited to mixing records. They include his live vocals, percussion, samples, visuals and occasional guest performances. The colorful live sets and consistently innovative productions landed him on the cover of DJ magazine in May 2003, and expose him frequently on Pete Tong’s BBC1 radio shows. On April 26th, the British station aired the first Scumfrog Essential Mix. For over ten years, The Scumfrog (a.k.a. Jesse Houk) spread his distinctive sound in clubs throughout Europe. In 1997, the DJ and producer packed his record bags and brought his sound stateside to New York City. During the next two years, he released "The Watersong", (featured on Danny Tenaglia’s "GU Athens"), and the soulful single "Learning To Fly", which he signed to R*Senal records, the label of house music heavyweight Roger Sanchez. The Scumfrog and Sanchez toured together in 2001, and ever since, this Dutch born DJ/producer has been a familiar face behind turntables around the globe. Annie Lennox, Monica, Missy Elliot, New Order and David Bowie are just some of the names that have recently undergone the Scumfrog’s remix treatment, and there are many to follow. When he is not remixing or producing other artists, he is working on his artist album, scheduled for completion in September. To check out everything about The Scumfrog, visit www.thescumfrog.com. Keep an eye on this amphibian, as he is leaping all over the place.